For example, monoclonal antibody therapies targeting cytokines, cytokine receptors or proteins expressed on cellular membranes (such as CD markers) can have a broad range of effects on the immune system. These effects can be studied in vitro by analyzing various leukocyte subsets, such as monocyte differentiation into macrophages or dendritic cells, CD4+ T cell skewing into different helper subsets or NK cell activation.

In vitro monocyte skewing in a mixed lymphocyte reaction (MLR)

PBMCs from two/three healthy donors have been co-cultured to elicit an allogeneic response in a MLR in the presence of a biologic. The biologic that was added inhibits T cell proliferation. To determine a possible mechanism of action to explain this effect, macrophage differentiation was measured by studying CD14 and CD206 expression, typically used to define regulatory macrophages, on HLA-DR+ cells after a MLR. Left, dot plot of a representative donor, right compilation of all donors. 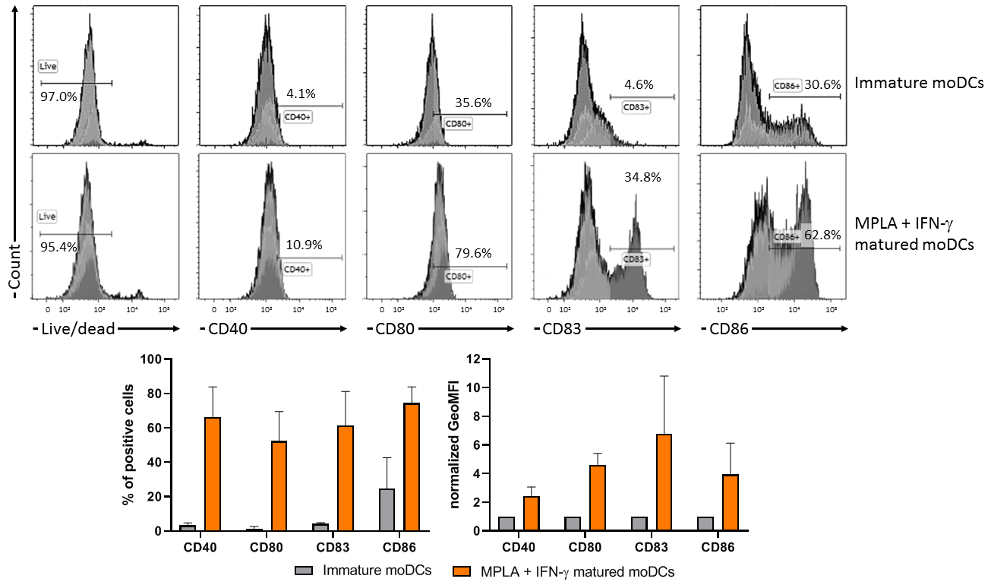 CD14+ monocytes were isolated from three buffy coats from healthy donors via magnetic cell sorting. Monocytes were cultured for 7 days in the presence of IL-4 and GM-CSF and then matured for 2 days with MPLA + IFN-γ. Generation of moDCs was assessed by determining the upregulation of CD40, CD80, CD83 and CD86 via flow cytometry. Up, representative histograms from one donor. Down, data from three donors from 1 representative experiment detailing percentage of positive cells and the geoMFI of matured moDCs normalized to immature moDCs. These cells were subsequently used to present antigen to T cells, which was assessed via a proliferation assay.