To improve the quality of blood products several processing steps were studied and optimized.

A new method for preparation of red cells, that has the potential to reduce donor exposure for fetuses in need of intrauterine transfusion (IUT) was developed. Because IUT of fetuses for treatment of hemolytic anemia is associated with additional antibody formation, red cells with the closest match between donor and mother are preferred. Finding such red cells from inventory is complicated and, moreover, a fetus needs a median of 3 IUTs. Collection of repeated low volume donations of 100 or 200 mL whole blood from one selected donor during the entire IUT treatment period would reduce donor exposition and possibly IUT-associated allo-immunization. 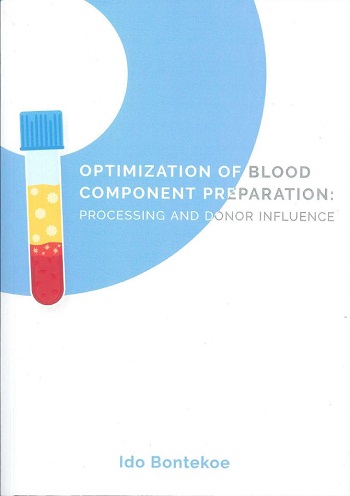 Furthermore, it was demonstrated in an older donor group that platelet storage performance is partly donor dependent. Based on QC data of outdated PCs, 6 donors with good and 6 with poor-storing PCs were selected. Donor characteristics were about comparable. Lactate production in ‘good’ PCs was lower than in ‘poor’ PCs resulting in a higher pH from Day 5 onwards. At the end of storage, the ‘good’ PCs were less activated, showed less signs of apoptosis, and had a higher mitochondrial membrane potential.

Nonetheless, also the ‘poor’ PCs fulfilled European Guidelines during 7 day storage. The differences were perhaps due to different functionality of the mitochondria, but this could not be proven. With regard to the donors, it was found that metabolic syndrome and Type 2 diabetes are likely causes for ‘poor’ platelet storage properties.

In the older groups, no association with Type 2 diabetes was found. On the cellular level, also no differences in mitochondrial membrane potential were detected between any of the groups. On average, platelets from older donors showed poorer in vitro quality but, considering the storage conditions used in this study, the implications for the daily blood bank routine is probably small. Recently, the Dutch blood bank switched to PAS-E as universal storage medium for platelets, which was not only a step forward in standardization, but may also mitigate effects of poor-storing platelets. To establish the underlying causes of poor storage performance and the implications for donors and blood products, more research is needed.