Special immune cells attack breast cancer during antibody therapy by tearing apart the tumor cells, a process that resembles trogocytosis and was coined ‘trogoptosis’ (from Greek ‘trogo’: to gnaw). Such a cytotoxic effector mechanism has not been described before in cancer research. Researchers from Sanquin have published this in Cell Reports.

With the recently awarded grant from the Dutch Cancer Society (KWF), one of the lead scientists can further study this mechanism with the aim of improving existing cancer treatments. First results in that direction are promising.

Neutrophils, a type of immune cells, are very important to fight infections. Less is known about their role in cancer. With a KWF research grant the group of Professor Timo van den Berg has discovered how neutrophils destroy the breast cancer cells during antibody therapy: little by little they rip the cancer cells apart.

Researcher Hanke Matlung: "With a fluorescence microscope we saw that neutrophils actively tear pieces of the cell membrane and eat them, until the tumor cell lyses." Unfortunately, cancer cells are capable of resisting such an attack of neutrophils. With the Young Investigator Grant from KWF, Matlung wants to investigate this further. This could again give starting points for new immunotherapies. 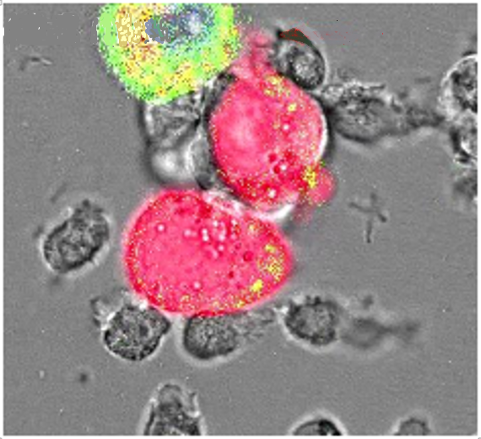 Photo: Neutrophils(colorless) tear pieces of the membrane of the antibody-bound cancer cells (pink). The upper cell has already burst, the contents are leaking out. In green a cancer cell that has been already killed.

In antibody therapy, a form of immunotherapy, women with a certain type of breast cancer are given antibodies that bind to the cancer cells. This allows immune cells, such as neutrophils, to recognize and fight the cancer cells. Previously, the same researchers found that cancer cells still dampen an attack of neutrophils by expression of CD47. CD47 on the cancer cell then functions as a so-called "don’t-eat me" signal after binding to SIRPα, expressed by myeloid cells. The researchers were able to block this brake, with the result that neutrophils became even better able to induce antibody-mediated cell death of the breast cancer cells. In collaboration with Sanquin, Synthon Biopharmaceuticals B.V. now develops antibodies to block that brake.

Antibody therapy does not work equally well in all patients. For an increased chance of cure, antibody therapy in cancer is often still combined with chemotherapy. Matlung: "With the immune system off the brake, in the future this may not, or to a lesser extent be necessary any longer. Initial experiments in that direction give promising results ". Apart from breast cancer, the researchers also focus on other forms of cancer that are treated with antibodies, such as colon cancer or lymphoma.