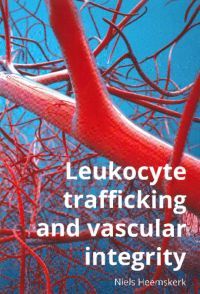 On 10 February 2017 (14:00 hrs) Niels Heemskerk defended his thesis 'Leukocyte trafficking and vascular integrity' at the University of Amsterdam.

The endothelial cells that pave the inner lining of blood vessels maintain a tight barrier between the vasculature and the underlying tissues. However, disruptive stressors, such as transmigrating leukocytes and inflammatory mediators challenge blood vessel integrity every day. In this thesis, we investigated several protective mechanisms that enables endothelial cells to cope with a continuously changing vascular environment. On a daily basis billions of leukocytes traverse the endothelial barrier without damaging the vascular bed or underlying tissue. In this thesis, we show that leukocyte diapedesis is in part regulated by the spatial distribution of ICAM-1 in microdomains within the plasma membrane. However, the precise mechanisms by which the endothelium maintains a tight barrier during ICAM-1-mediated leukocyte transendothelial migration is currently poorly understood. Here we show that local RhoA-mediated F-actin rings contribute to endothelial pore confinement that locally maintain endothelial barrier integrity preventing vascular leakage during leukocyte diapedesis. In addition, the ability of endothelial cells to renew their junctions after disruption by inflammatory mediators or leukocytes is instrumental in barrier maintenance and stabilization. Additional studies revealed a key role for the Rho-GEF Trio in stabilizing VE-cadherin-based junctions. Finally, we describe a methodology to screen for new endothelial proteins that regulate vascular integrity during leukocyte diapedesis. Altogether, the work described in this thesis shows the importance of the endothelial cells in regulating vascular homeostasis during inflammatory events such as leukocyte transendothelial migration. ICAM-1 regulates both leukocyte trafficking and vascular integrity during inflammation-driven leukocyte recruitment. We conclude that endothelial barrier maintenance during inflammation and leukocyte diapedesis are regulated by independent pathways.