In one month, the percentage of donors with antibodies against the corona virus has risen from 21% to 32%. This is the largest increase so far since Sanquin periodically measures antibodies.

There is a very sharp increase in donors aged 61 to 70, caused by the vaccination in that group. Their percentage now is above 40%. The donors aged 71 and older are still slightly behind, but quickly increased to about 35%. Sanquin's prof. dr. Hans Zaaijer: “It is nice to see the vaccinations reflected so well with the donors. On the other hand, we see that the antibodies in donors aged 18-30 are also steadily increasing, to over 30%, but that is due to ongoing infections.”

Difference between men and women

The difference in seroprevalence (the percentage of people that have antibodies) between men and women that Sanquin found last month can be attributed to vaccination of healthcare personnel after this month's study. Sanquin examined the donations to see whether the antibodies were caused by a previous infection or by vaccination. After an infection you make antibodies against more parts of the virus than after vaccination. That difference is fairly easy to measure. “In the Netherlands, many more women work in healthcare than men, as you can see in our figures. The difference between men and women with antibodies is neatly explained by the vaccination of healthcare workers.” 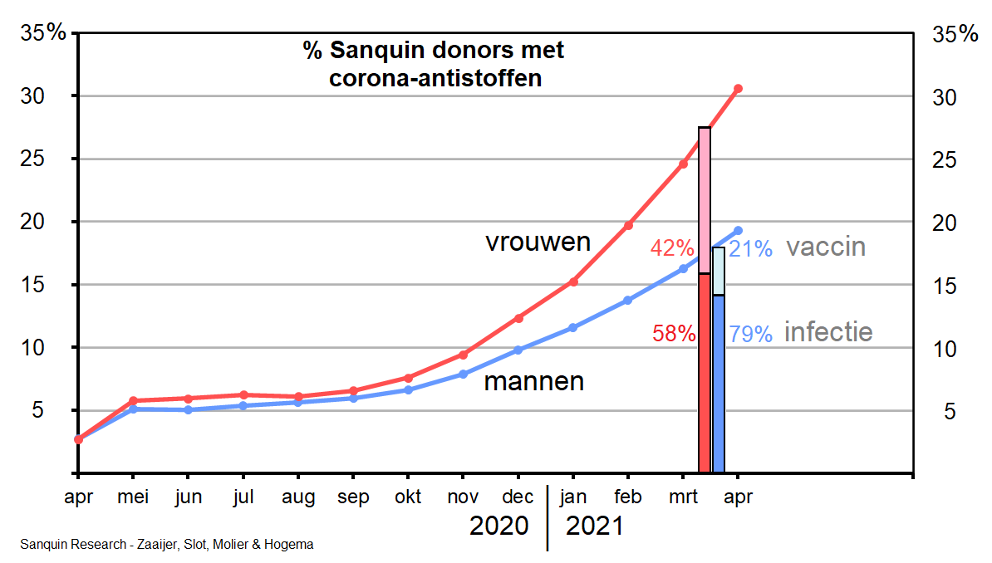 A seroprevalence of 32% is not yet enough for the herd immunity in which the outbreak disappears spontaneously. For this, an immunity of approximately 67% must be achieved with the current variants of Covid19. Fortunately, the percentage is rising rapidly due to the vaccinations.

Every week, Sanquin's Vinger aan de Pols (VAP) study examines a sample of approximately 2,000 blood donors for antibodies, in addition to the research that the RIVM conducts into antibodies. Measuring antibodies in donors provides insight into the spread of COVID-19 and the degree of vaccination in the Netherlands. Sanquin is doing this on behalf of the Ministry of Health, Welfare and Sport, at least until June of this year.