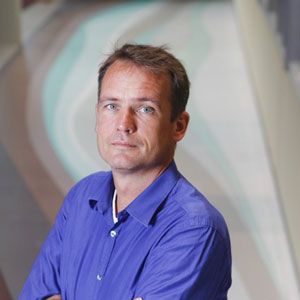 As of May 1st, Professor Gerald de Haan (1965) will be appointed as Director of Sanquin Research. De Haan succeeds Rene van Lier and will be a member of Sanquin's Executive Committee.

De Haan currently is professor of Molecular Stem Cell Biology at the UMC in Groningen and Scientific Director of the European Research Institute for the Biology of Aging (ERIBA). He has more than 25 years of research experience in hematology and stem cells. He has conducted intensive research into the molecular mechanisms involved in self-renewal and stem cell aging.

Tjark Tjin-A-Tsoi, CEO of Sanquin, is delighted with the appointment of De Haan: “With Gerald we welcome an energetic and enterprising top researcher as well as a wealth of relevant knowledge and experience. In addition, he has a very large international network. I am convinced that in the coming years, with Gerald at the head of Sanquin Research, Sanquin will continue to realize important product and process innovations that will ultimately benefit patients.”

Sanquin Research is a renowned research institute where scientists, often in collaboration with universities and companies, carry out fundamental and applied scientific research in the fields of anemia, bleeding and hemostasis, cancer, immune deficiency and aging, and inflammation and vascular diseases.

De Haan has known Sanquin as a donor for some time: “After being a blood donor for 19 years, it is a great honor for me to lead the Research Division. Sanquin’s research on blood, from fundamental to applied and patient-related, is internationally leading. New scientific developments brought about by Sanquin Research will undoubtedly allow for new treatments for patients with blood disorders. I hope and expect to contribute to this mission together with the researchers at Sanquin.”