Neighborhood watch in tissues: from helper cell to killer cell

Researchers from Sanquin and the University of Würzburg have discovered that in tissues, immune cells with a helper cell profile can develop into killer cells at the moment of intense inflammation. These cells fight pathogens and infected cells. The Hobit gene turned out to be the essential switch for the transformation into a killer cell. Manipulation of this gene could contribute to the treatment of cancer or chronic inflammatory diseases. This was published in Nature Immunology.

For an effective immune reaction, it is very important to keep a balance between a calm and an active state of immune cells. When the response is too weak, this can lead to a suboptimal immune reaction to an intruder. On the other hand, too much activation can cause persistent inflammation in tissues, like in autoimmunity. Most immune cells hunt intruders down in the blood stream, but a special group exclusively resides in tissues.

These “neighborhood watch” cells are called tissue-resident immune cells. They are often able to respond incredibly fast to incoming threats, and maintain peace in organs such as the liver, lungs and intestines. Broadly speaking, an immune cell can protect us in 2 ways: “helper cells” release warning signals to other immune cells to recruit them, and “killer cells” can neutralize cells infected with viruses or bacteria and tumor cells.

Maturing into a killer cell during inflammation

Scientists from Sanquin and the University of Würzburg investigated a certain tissue-resident cell, the type 1 innate lymphoid cell (ILC1), a typical helper cell. The researchers noticed that, contrary to other organs, about half of the ILC1s in the liver of mice had features normally only seen in killer cells, like the ability to attack and kill tumor cells in a Petri dish. The ILC1s from the liver were examined using a new method called Single-Cell RNA sequencing. This method allows detailed study of the genetic fingerprint of individual cells. It turned out that the ILC1 helper cell is able to mature into a killer cell when there is severe inflammation in the tissue. This research was published in Nature Immunology.

Moreover, the researchers also found that all killer cells in the liver had once started out as helper cells. Under the influence of a gene called HOBIT, these former helpers had matured into killer cells. Once ILC1s had become killer cells, they were unable to change back into helper cells. Interestingly, when the researchers removed HOBIT from the genome of the mice, the ILC1 were stuck as helper cells and were not able to mature in the tissues. In short, it is possible to control the activity of these cells by regulating the presence or absence of the gene HOBIT. 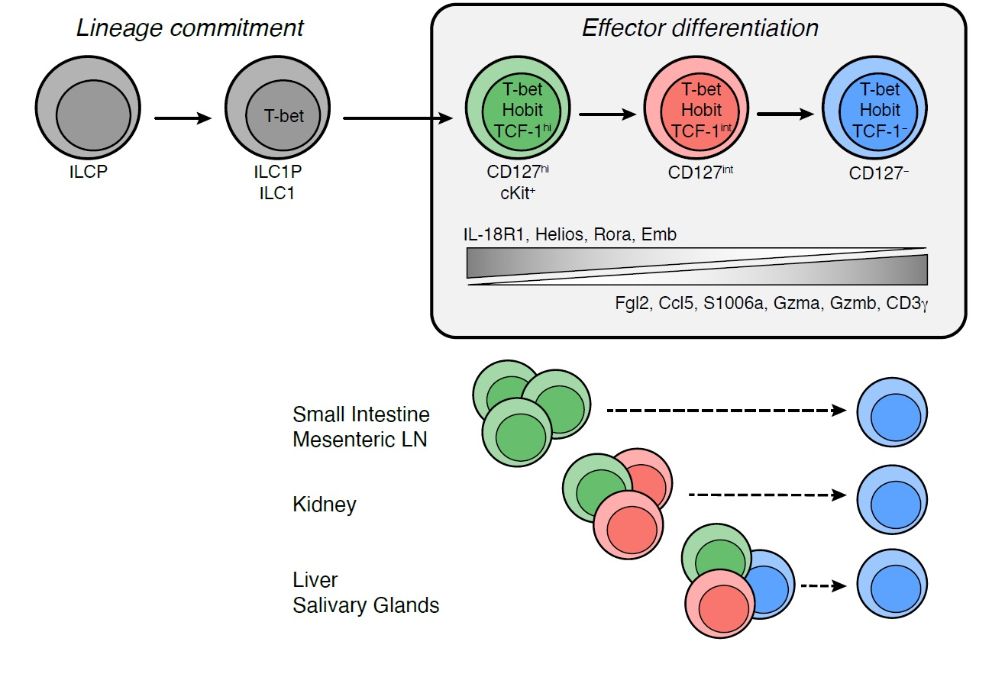 To kill or not to kill?

Much research on immune cells is currently done to study how vigilant responses against intruders are achieved without harming healthy tissues. In some cases, a lack of balance can cause illness. This is the case in tissues of patients with inflammatory bowel syndrome, obesity or liver damage. These are all diseases associated with an increase of ILC1s in tissues. The current research has uncovered a new role for ILC1s, and has described a way to control the state and activity of LC1 through the presence or absence of the gene HOBIT. More research will be needed in the future in human tissues. It will be interesting to know if promoting a killer state will boost immunity in tumors, and if promoting a helper state can give relief in people with chronic inflammation.