Blood transfusion is still based on donor blood. But imagine we could in special cases help particular patients using lab-grown blood. Marieke von Lindern (head of the Hematopoiesis department at Sanquin Research) is investigating the possibilities.

Our bone marrow is packed with blood-forming (haemotopoietic) stem cells that constantly produce red and white blood cells and platelets. One intriguing question is whether it is possible to create such a source of blood outside of the human body: a source producing enough red blood cells that they can be used as a transfusion product for patients suffering from anemia. While this may sound like science fiction, the topic is Marieke von Lindern’s bread and butter.

But ‘yes’, too, is a correct answer, because we have never actually grown such a second bag worth of cells in practice. The culturing process is, as yet, too laborious and expensive, while the yields are in no way comparable to the amounts produced in the bone marrow. So, in that sense, lab-grown blood is still not a serious competitor to donor blood and, therefore, still is science fiction.”

How do you actually grow blood?

“The white cell fraction retained after having ‘harvested’ the red blood cells also contains the blood-forming stem cells. Some research groups remove these stem cells from the white cell fraction to culture them. However, we keep them in the fraction, as some of the white blood cells initially actually boost the creation of red blood cells. Later, you can grow the red blood cells further, using a mixture of EPO, stem cell factor and corticosteroids. While this is all biologically feasible, it’s currently way too expensive. We need to be able to do it at least a thousand times more cheaply.”

So it’s not a matter of finetuning the culturing method?

"No, we really need some actual breakthroughs as yet. It must become possible for cells to grow closer together, the metabolism – that is, the supply of food and removal of waste materials – must become many times more efficient. We might need to alter the cells themselves somewhat. So, we still need to make some significant improvements in various aspects.

For example, we are currently teaming up with Delft University of Technology to research whether we can render such processes suitable for bioreactors, because we really need to scale up matters to such an extent to make lab-grown blood a viable option.” 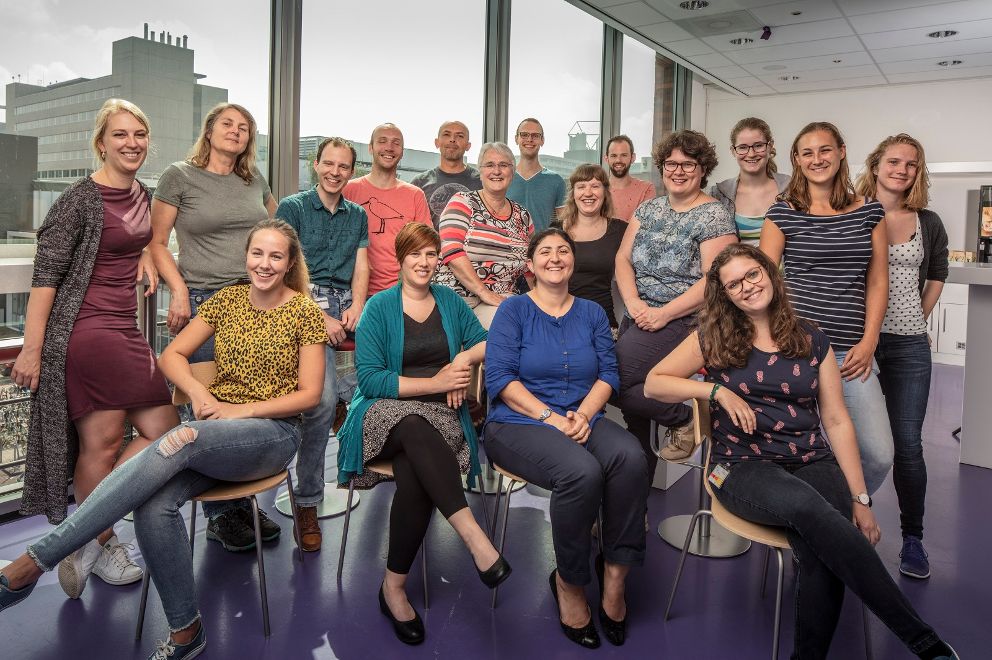 Lab-grown blood sounds nice, but why would you actually want it? Why is Sanquin even interested in lab-grown blood?

“Blood donations involve a donor and a recipient. Because not everyone has the same blood type, the donor blood must be as close a match to the recipient’s blood as possible. This is not easy to achieve. We now have thirty blood type systems with over three hundred blood types. By default, blood is matched on types A, B, zero (O) and on the rhesus factor, as a difference thereof immediately causes problems. Mismatches of the other blood types do not as easily result in immune responses; the odds of such a response is between 3 and 6 per cent. If you require blood after a serious accident, screening the blood for the aforementioned blood types suffices. You do not need lab-grown blood for those situations.”

For which patients could lab-grown blood be a solution, then?

“For patients suffering from chronic anemia who often require blood transfusions, and for women aged below 45, in connection with possible pregnancy issues. To them, that small risk associated with all other blood types adds up for each new donation. So this means that, to these patients, matching on many more blood types is very important.

Sanquin already screens on many more blood types than ABO and the rhesus factor, but not on all three hundred of them, as that would be impracticable. Patients suffering from sickle cell ane-mia and thalassemia, in particular, often require a blood transfusion. Their globin gene, which codes the hemoglobin proteins and is crucial for the transport of oxygen within the red blood cell, is defective. These disorders were historically prevalent in Mediterranean countries, in Africa and in parts of Asia, as they protect against malaria.

Genetically, the distribution of blood types within that population also differs from that of people in the Netherlands and northern Europe. Because most of our donors are of northern European origin, it can sometimes be difficult to again and again find a proper donor for people suffering from sickle cell anemia. The Duffy blood type provides a fine example for illustrating how matching works. In northern Europeans, this protein is almost always present on the red blood cells. However, 30 per cent of the population in Mediterranean countries does not have Duffy. Should they be given blood containing Duffy, they may produce antibodies against it. The more often they receive a donation of blood with types they do not themselves have, the higher the probability of transfusion problems.”

Would the production of a “universal blood” that features no blood types, not be an ideal solution, in that case?

“Exactly! This is precisely what we intend to create and forms a very important reason to study the possibilities available with respect to lab-grown blood! Blood without any blood types would be the easiest to use. This sounds somewhat internally contradictory and is not entirely possible in practice. However, there are donors whose blood is a very close match. These donors are only called in on request, almost as a last resort when no other viable alternatives exist for a recipient. If we could create cell lines on the basis of their blood, lines that would continue to produce new blood and would never be exhausted, that would be great. We have found that we could provide proper blood to almost all patients using eight different cell lines.”

Suppose you will be unable to find the exact right variants for those eight cell lines from among the donors, would there be any other options open?

“Absolutely. Using Crispr-Cas, a recently developed technique, we are able to targeted remove proteins. In essence, this technique is about using a pair of molecular scissors that allows you to cut genetic material very accurately, quickly, cheaply and effectively. If it turns out we’re unable to find those eight cell lines from natural sources, we can always try to ‘cut them to size’. In addition, the technique for creating iPS cells also provides some options. This technique for instance allows for creating stem cells from skin cells, which can then be guided towards becoming blood-form-ing stem cells. This makes it another promising technique to obtain our goals.”

Hardly ever have I heard someone talk so passionately about blood. You must have dreamt about creating swimming pools filled with grown blood as a teenager already.

“Not at all. In fact, when I was asked to come work for Sanquin in 2010, I really wondered whether that would be a good idea. Culturing blood? Please! You’d do better to organize a solid donor recruitment campaign! In my view, cultiring blood was a way of trying to obtain something already given directly and for no reward by donors in a very roundabout way. However, that position changed very quickly once I was confronted by the transfusion problems by my colleagues at Sanquin and when he-matologists in Rotterdam and Amsterdam told me how dearly they would love to have lab-grown blood for some of their sickle cell patients who had already developed antibodies against almost all blood types.

And even then, I sometimes had some doubt, because we knew so little and were so far removed from our goals. My colleague, Ellen van der Schoot, was well able to counter those doubts by comparing our quest for lab-grown blood to the development of the computer. The first computer could do almost nothing and required an entire room, she would say. Even though it might seem difficult, too expensive and not realistic right now, we simply need to make a start! Currently, we require about a thou-sand liters of culture medium to create one bag of lab-grown blood, with a price tag equal to that of a higher mid-range car. That’s not a realistic option. But then it helps to think about that  computer. Development takes time.”

Lab-grown blood does not yet constitute a realistic option for the provision of blood to certain groups of patients. Are there any other applications of the research findings?

“Do not forget that progress can sometimes be made very quickly and may occur unexpectedly. Lab-grown blood has already been successfully introduced into a human being, a healthy volunteer. While that has happened only once and concerned a batch of one milliliter only, it is possible and turns out to be safe, thus encouraging further development. But, indeed, the research results are already applied in multiple contexts.

One Boston-based company, Rubius Therapeutics, for instance, wishes to cultivate red blood cells on an industrial scale for packaging cytotoxic medication: the red blood cells are to function as vehicle for enzymes used to combat tumors. And when you also let those cells know the ‘postal code’ of the tumor cells, they are directed to those tumor cells to become active.

A French company is taking a similar approach, albeit using a different technique. They apply an electric shock to a red blood cell to extract the hemoglobin, allowing for inserting medication into the vacated areas. This research is in an advanced stage: a Phase III study in people suffering from pancreatic tumors is currently ongoing. Another option is to insert substances into red blood cells to capture toxic substances in the blood, or load them with peptides, with little protein structures, to induce tolerance to certain substances. So, while there is no lab-grown blood yet, the research we’re conducting has already led to many spin-offs.”

What are you currently working on?

“An exciting, fascinating phase! Not too long from now, in collaboration with the AMC, we will provide a lab-grown blood donation to six volunteers. This will not be a full 250-millilitre batch, but one of 25 milliliters. It concerns a Phase I study, in which we will look into the safety of the procedure, but also into the behavior of the red blood cells. Are they stable, can they properly transport oxygen, for how long do they survive? Issues like those. This will not solve the major problems involved with the cultivation of blood, but it will result in much valuable knowledge. And to be true, should we in time become able to cultivate blood easily, cheaply, effectively and in large quantities, such blood will only be used in the specific cases I mentioned before. Donors will continue to be primarily responsible for the provision of blood.” •

Marieke von Lindern is head of the Hematopoiesis department at Sanquin Research. Her group is collaborating with the research group of Dr Emile van den Akker in researching cultered blood blood.