Tissue-resident lymphocytes include Trm, a subset of memory CD8 T cells that in contrast to circulating memory cells permanently reside at barrier tissues, NKT cells and tissue-resident NK cells. We have compared these populations of tissue-resident T cells and NK cells using transcriptional profiling. All of these lymphocyte subsets shared a set of genes involved in the regulation of tissue-residency, suggesting that this process is universally controlled. Importantly, we found that the transcription factor Hobit was highly expressed in all subsets of resident lymphocytes in contrast to circulating lymphocytes. Functional analysis revealed that Hobit in collaboration with the related transcription factor Blimp-1 was specifically involved in the formation of Trm cells, NKT cells and tissue-resident NK cells. Hobit and Blimp-1 directly bound and repressed genes encoding for proteins that promoted the circulation of lymphocytes, providing insight into the molecular mechanism of action of these transcription factors. The knowledge that we have obtained on the transcriptional regulation of Trm provides a molecular framework that we aim to apply to the manipulation of Trm development to ultimately employ these cells in therapeutic settings for the treatment of cancer or infection patients. 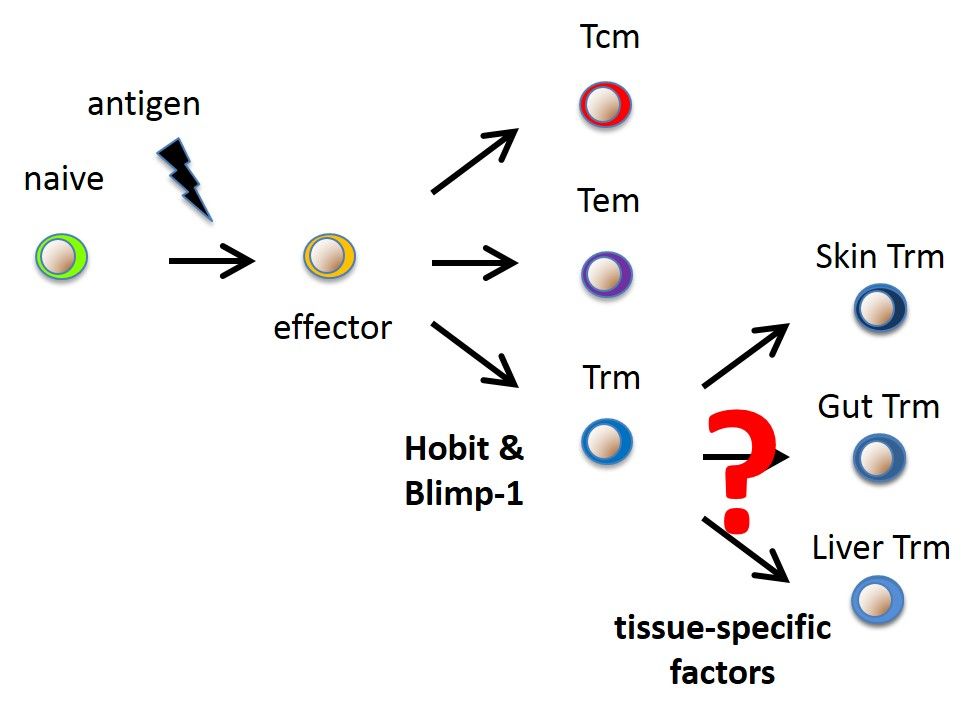 Trm have been recently established as an important subset of memory cells that provide early and essential protection against re-infection in the absence of circulating memory cell. As many tumors are of epithelial origin, and the prime location of Trm is within the epithelium, Trm are also likely relevant in protection against cancer. Indeed, CD8 T cells with the phenotype of Trm have been found to infiltrate tumor tissue in for example lung and ovarian cancer and the presence of these memory CD8 T cells correlates with patient survival. Trm form a substantial population of memory CD8 T cells that can be comparable in size with circulating memory cells, but is often underestimated due to the difficulty in extracting these cells from the tissues. Indeed, our results confirm that Trm within healthy tissues are extremely sensitive compared to circulating memory cells to cellular destruction that occurs during the preparation of single cell suspensions. The extensive enzymatic digestion required to obtain tumor infiltrating lymphocytes (TILs) from tumor tissue results in up to 50% of cell death within the TIL population, suggesting that a substantial fraction of CD8 T cells including part or all of the Trm phenotype cells are lost prior to the start of the culture. It is unclear whether Trm are maintained into the TIL product that is re-infused into the patient. We hypothesize that preventing danger signalling during tumor resection or prepping will ensure that TIL cultures encompass tumor-specific Trm and thereby will improve the anti-tumor activity of TIL cultures. Therefore, we aim to explore protective measures and culture protocols that ensure that Trm can be wielded for use in adoptive CD8 T cell therapy.