Twan de Waard blogs from the ECI, where he held a Bright Spark presentation on a new way to prevent immune evasion. News
4 September 2018 (Last edited on: 4 September 2018)

Even though I have presented parts of my research already quite some times on meetings within Sanquin, on congresses in the Netherlands and at two international congresses, the first few lines are always tough. Sweaty hands, dry throat and constantly that voice telling you to keep thinking about the right tempo, speaking volume and distance to the microphone. In the end all fears were futile, speaking in the auditorium of the beautiful RAI is just a great experience! 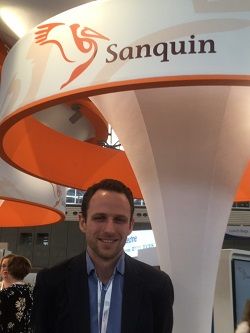 Once every 3 years the European Congress of Immunology is organized, this time in Amsterdam by Marieke van Ham, professor at the University of Amsterdam and head of the Department of Immunopathology at Sanquin. Over 2700 abstracts were submitted to the European Congress of Immunology. A team of reviewers then set out to read and score each abstract; for oral presentations each abstract was reviewed by 3 people, for poster presentations 2 people would suffice.

In the end 370 abstracts were awarded an oral presentation in so-called ‘workshops’; sessions dedicated to a single topic in a room that would fit 50 to a few hundred people, depending on the popularity of the topic. However, besides these 370, the 24 best-reviewed abstracts were selected to give a ‘Bright Spark’ talk. Of these 24 abstracts, 3 abstracts were submitted by researchers from Sanquin; Regina Stark, who works on the effects of inflammation and tissue destruction on tissue-resident T cells; Felix Behr, who will talk about the origin of tissue-resident T cells and the effect of local inflammation on these cells; and my abstract on the modulation of membrane proteins by lipid-bound sugars in the outer leaflet of the cell membrane called glycosphingolipids.

Although glycosphingolipids are generally thought to be mainly involved in membrane organization, since 2003 there have been multiple surface receptors, such as the insulin receptor or epidermal growth factor receptor, reported to be modulated by glycosphingolipids. Since several tumors and virus-infected cells have been shown to alter their glycosphingolipid pattern, it is relevant to know whether such modulation of surface proteins also takes place at surface molecules that are involved in the immune system.

Shielding from the immune system

In our research, we were able to show that indeed 18 of the tested 26 membrane proteins can be ‘shielded’ by long-chain glycans on lipids, called (neo-)lactoseries glycosphingolipids. By exploiting antibody-based assays we found that for the Human Leukocyte Antigen (HLA) the membrane-proximal epitopes were shielded for antibodies whereas epitopes distal from the membrane were not.

Using recombinant receptors LIR-1 (one of the natural receptors for HLA-I) and SIRP-α (the natural receptor for CD47), we show that also receptor-ligand interaction is disturbed or nearly absent, respectively, in cells that express these (neo-)lactoseries glycosphingolipids. Most importantly, we also found that CD8+ T cells respond less efficiently to cells that carry these (neo-)lactoseries glycosphingolipids. Since Acute Myeloid Leukemias, low-grade gliomas and CMV-infected cells for example have been described to upregulate this type of glycosphingolipids we hypothesize that these cells exploit this strategy to evade immune surveillance.

Although a therapy is still far away, it is interesting to note that specific inhibitors, glucose analogs, for glycosphingolipid synthesis are already FDA approved and prescribed for patients with lysosomal storage disorders. Based on our research, these drugs could provide a novel therapeutic to decrease the immune evasion of infected cells or tumors, which may form a combinational therapy together with the Tumor Infiltrating Lymphocyte therapies that are developed within Sanquin